This week I take on CornerStone Bank, a North Dakota-based bank with a swirly logo, which is trying too hard to shave the edges off its name and be more trendy. Too much is the keyword here.

The original design seen to the right suffers from the spiral syndrome along with its nearest cousin the Hilton Hotels logo. While swirly shapes give a great impression of movement and dynamics, it would work best with technology, multimedia and information-based companies. Also, the original designer probably struggled with the fact that 5 or more other Cornerstone Banks already exist out there with very similar ideas for their logos, adding the pressure to innovative for the sake of distinction rather than representation.

On the other hand, a bank logo have the following:

Hence, think inside the box! By creating a simple, muted and square shape we present a powerful and safe look for a bank logo. A square doesn’t have to be conventional though, there are many ways to elaborate on the design without going visually overboard.

And here are my three ideas for a new logo based on the original colors and stated requirements: 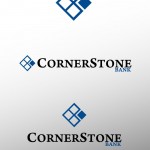 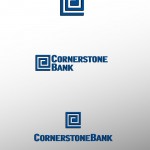 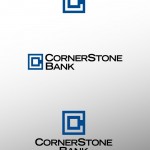 Which one of all the above would you identify CornerStone Bank with? Got suggestions for other logos in desperate need for a redesign?

Drop me a line.

“Redesign This” is an unsolicited personal critical impression, opinion and design conclusion. All original logos belong to their respective owners. No logos were skewed, liquefied or harmed in the making of this article.
{ 2 comments… add one }

This site uses Akismet to reduce spam. Learn how your comment data is processed.